On Being Minimum and Viable: MVPs and Mundane Realism

The concept of the minimum viable product is now part of the popular lexicon within the lean startup movement. As with most terms that become over-used most people still misunderstand what an MVP really is. Since most people assume “lean” means cheap, they also assume the MVP means “crappy version of future product”. However, lean startup has nothing to do with being cheap. As with Lean Manufacturing the focus is on reducing all activities that don’t add value to customers. By that logic, the goal of a startup is to maximise learning by discovering what customers find valuable and a sustainably profitable way for the company to deliver that value to customers.

The role of the MVP in this process is crucial. The goal of deploying an MVP is to learn something about the customers. Usually after conducting customer development interviews, startups should then follow-up the signals they get by requiring customers to perform some sort of action. This is where MVP’s comes in handy.  But it’s really important to distinguish principles from tactics. A lot of entrepreneurs get trapped trying to imitate an MVP tactic they read as a case study on some internet-ninja-guru-mentor’s blog: “Let’s set up a landing page” or “We need to do some concierge dude” or “We must do an A/B test”. To practice customer development and lean startup effectively you have to embrace the principles and be tactic-agnostic.

An important principle: In a lean startup, the hypothesis precedes the MVP. No MVP should ever be developed until a specific hypothesis has been clearly stated. This means that the innovation team must decide what it wants to learn first, and from which target market segment; before choosing the research method to learn with. If you think about it for a moment this makes sense. In our personal lives, we often need to know something first, before we choose how we are going to find out. It is rare that somebody ever says “I have got this tool to learn stuff with, now let me decide what I want use it for”. It happens, but it’s rare; and it is often an ineffective approach. As an academic, I know from experience that the worst students are the ones that knew they wanted to go to university first and then just chose some discipline to study.

An equivalent metaphor, often used by Eric Ries, is the scientist who just steps into a lab and starts mixing chemicals without any hypotheses or theories about what might happen. They are likely to be a “dead scientist” in the near future. MVPs are the same way. If you just start building an MVP without any hypotheses or learning goals, how will you even know when the MVP is ready? Remember that the definition of MVP is the minimum thing you need to build to maximise learning. Most innovations teams will argue for days about what features should be part of the MVP and what features should be dropped. Of course, this is never an easy process but it can be improved remarkably by knowing beforehand what the team wants to learn. So if a feature is proposed, it can be examined under the lens of whether it helps to maximise the learning that is related the specific hypotheses being tested. This is a key principle.  MVPs are the operational implementation of the hypotheses being tested.

Principles trump tactics. If you know beforehand that you want to do an A/B test, this will constrain your learning goals. In contrast, if you follow the principles of hypothesis-driven innovation, there is no limit to how creative you can be with your MVPs; as long as they meet the criteria of the minimum things you can build to maximise learning. You could even ignore the most commonly used MVPs or tweak them to specifically fit your circumstances.

An important principle: An MVP does not need to mirror exactly how the product will work when it is fully functional. The goal is to maximise learning. As such, the only way to judge whether or not your MVP is good is based on how well it provides a test of your falsifiable hypothesis. It is not how about how realistic your MVP is.

An example of classic psychological study can help explain this. In the 1950’s, Solomon Asch and his research team where interested in whether an individual’s opinion or judgement would be influenced by the group. An expensive way to do this research would have been to get people to form gangs, or join gangs, political parties and other groups. The researcher could then spend years doing this work at great expense; and they would also get data that is strongly impacted by contextual and other confounding variables.

Solomon Asch and his team came up with an ingenious method that allowed them to conduct research  in the lab. They had male participants come to the lab and join a group of six other people. Unbeknown to the male participants, the group they were joining where all confederates of Solomon Asch. The true focus of the study was not on the group, but on the one male participant who joined them.  The seven people then sat down and were presented with a card that had one line on it. They were then shown another card that had three lines on it labelled A, B and C. Each member of the group was asked to say out loud which of the three lines on the second card matched the line in the first card (see below).

But here was the experimental realism in the study. Before beginning the task, the group sat down in a manner that meant that the “real” participant was the last person to give their answer. On the first two trials, the participant was made to feel at ease as all six people before him gave the correct answer. However, from the third trial onwards the confederates started giving the wrong answers to such an obvious task. Imagine looking at the lines above and everyone before you loudly proclaims that B is the line that matches the single line on the other card. 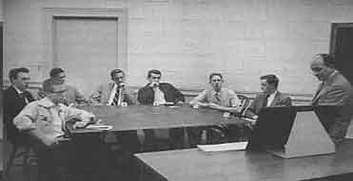 The question for the research concerned whether participants would conform and also give the wrong answer. Asch found that over 65% of the participants conformed at least once. The experimental realism in this research is quite profound. I have been a confederate in a replication of this work and we stopped a couple of sessions because some confederates were so surprised by the effect, they couldn’t hold back their laughter.

An interesting point here is that, in terms of mirroring real life, this study is highly unrealistic. I have never been pressured to give a wrong answer on cards with lines before; and I suspect that neither have you all. So the study is very low in mundane realism. However, the study is very high in experimental realism. The psychological impact on participants is similar to that of another classic study by Stanley Milgram on obedience.

Principles trump tactics. My point here is that the goal of the MVP should be experimental realism. The innovation team needs to create experiences that feel like real-life but not necessarily look like real life. This can be achieved using any of the popular tactics such as landing pages, wizard of Oz or concierge. However, understanding the principle of experimental realism allows innovation teams to develop even more creative MVPs than the commonly known ones. It is important to remember that eventually mundane realism is achieved. But this is done when the innovation team has learned about customers’ motivations and behaviour.

The focus on scientific principles is the key take away message from this article. Hypothesis driven innovation is a set of principles, not tactics. The tactics are often provided as concrete examples of the principles in practice. However, innovators must never lose sight of the underlying principles. If we do, then we risk turning lean into a pseudoscience. Which can actually mean that we still make stuff nobody wants; while pretending to be scientific about it. So this post presents two key principles: 1) MVPs should NOT be developed before explicit hypotheses have been developed; 2) MVPs should strive to achieve experimental realism, before resources are spent of developing the “real-life” experience.