I am in a cargo-cult, what do I do if the plane actually lands: Do entrepreneurs really learn? 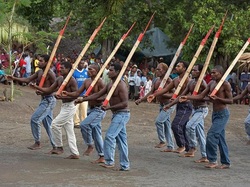 In a recent paper, Frankish and colleagues reported research showing that entrepreneurs do not really learn, they just claim they do. They analysed data from 6854 firms and found no connection between previous business ownership and likelihood of future success in a new venture. People who have previously owned a business had the same failure rates as people who are just starting out. Frankish et al. attribute this finding to the strong role played by chance in entrepreneurial success (i.e. you can’t really learn to play the lottery). This is the interesting thing about entrepreneurship. You can do all the ‘right things’ and fail. You can also do all the ‘wrong things’ and succeed. You can also do all the ‘right things’ and succeed, but your success will have nothing to do with anything you were doing. If you read books on entrepreneurship and innovation, they are full of advice about what you should do or not do. Grow virally, charge from day one, do not charge from day one, raise money, don’t raise money – bootstrap, built something that you find useful and others will to, build something beautiful, et cetera ad nauseum.

Most successful entrepreneurs provide advice based on their own experiences. However, no two entrepreneurship situations are exactly the same. This is why Frankish et al. found that previous entrepreneurial success does not predict future success. So following some entrepreneurship advice is a bit like being in acargo-cult. You don’t really know if the advice you are following is really relevant or useful for your situation. You are just doing the ‘right things’ because it is the ‘right thing’ to do…

But this is where it gets interesting. Imagine you are in a cargo-cult. You are doing all the actions you have seen other people do when planes were landing. You do it a few times and one day the plane actually lands!

If this ever happened, outsider observers might know that this is just a coincidence. You just happened to be doing your rituals when a distressed plane needed to land and was directed to your island.  However, for members of the cargo cult this will be certain confirmation that their rituals are the ‘right thing’ to do.

Now, in  real cargo cults there is no real chance of this happening or at least the chances are smaller than the likelihood of someone winning the lottery twenty times in a row in ten different countries. But in the cargo cults of entrepreneurial practice this can certainly happen, and it happens a lot! People’s business ideas can succeed because of reasons other than what they are doing (e.g. having a Facebook page). However, people will in engage in illusory correlations and connect their actions to their success. This is a classic case of being fooled by randomness. This is also why some entrepreneurs are often disappointed/confused after they do all the ‘right things’ and their business fails.

The lean startup approach is powerful  because viewing the startup as an experiment in search of a sustainable business model stops entrepreneurs from going gung-ho on ideas that sound plausible but are not fully tested. And when done right, it also deals with the cargo-cult problem because entrepreneurs are forced to explicitly state hypotheses about what they expect to happen and to develop scientifically sound methods for testing these hypotheses.

Then we will know, with some level of certainty, that in this situation, for this particular startup, these actions really caused ‘the plane to land’. We also know that in a different startup, in a different situation, even if it is working on the exact same product, those same actions may not necessarily lead to success.