This post is a brief follow-on to a great post by Tristan Kromer in which he describes what he calls the Lean Waterfall. In the lean waterfall, large organizations still maintain their silos (e.g. design, engineering and marketing). Within each silo, they practice agile and lean. However, between the silos there are still handoffs and large specification documents. As such, in the end what you have is an organization that looks like the graph below; with each departmental silo claiming to be lean, but at the super-ordinate level the organization is still functioning as a waterfall. 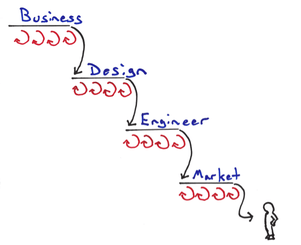 The solution to this problem is to create small cross-functional teams that are tasked with solving customer problems via products or services. This concept is well articulated in Jeff Gothelf and Josh Seiden’s book Lean UX. A cross-functional team contains members from each department/silo. In this context, designers are part of the same team with engineers and marketers. Cross-functional teams are great because they limit handoffs between departments and allows teams to fully practice lean as they work together during the same build-measure-learn sprints 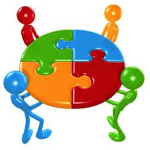 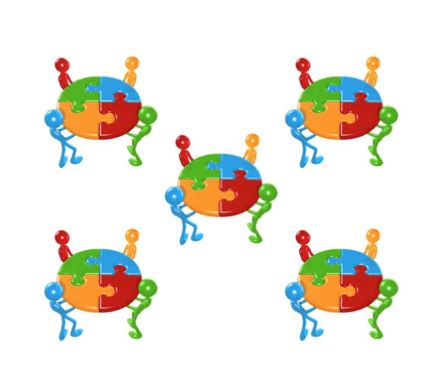 1) Secondment: Individual team members can join other cross-functional teams for brief periods (e.g. one week), to gain a different experience and also share whatever lessons they have learned from working with their own team. This can be a good way to cross-pollinate best practice and also learn what other teams are working on.

2) Rotation: At the end of each project, cross-functional teams are split up and new configurations of team members are put together for working on new projects. This is again a good way to cross-pollinate best practice. However, it has the draw back that teams have to go through the process of getting accustomed to working with each other on every new project. There is a value in long-term relationships that may be lost with too much rotation.

3) Team of Teams: This practice is based on the notion of scrum of scrums. In this practice, each team designates one member, as an ambassador to participate is a daily/weekly meetings with ambassadors from other teams. The ambassador role can be rotated, or assigned to the product owner. My preference is for rotating the ambassador role so that each team member gets a chance to learn what is going on in the organization first-hand.

4) Demo Day: Once a week/month various teams get together for a show-and-tell meeting where they demo the stuff they are working on and speak about any challenges they are facing. Teams can then give each other feedback and offer to help each other with specific resources, knowledge or talent.

Depending on the company and the nature of the work it does, some of the above solutions may not work for you. However, it is important to recognize the challenge of cross-functional silos and tackle it head-on. Bespoke solutions can then be created for your specific context. Please share other solutions to cross-functional silos that you have either implemented or seen in other organizations. Looking forward to your comments.